basically it is the pre-hispanic version of y2k

Posted by Abdul-Halim V. at 11:05 AM No comments: Links to this post

suheir hammad: what i will

Posted by Abdul-Halim V. at 10:47 AM No comments: Links to this post

A lively exchange on the nature of effective political change between Rep. Keith Ellison and Dhoruba Bin Wahad. This was actually part of a longer talk by Bin Wahad which took place Feb. 28 of last year, but Ellison happened to be in the audience when Bin Wahad started to criticize the Congressional Black Caucus.
From: Kasama
Posted by Abdul-Halim V. at 2:47 PM 2 comments: Links to this post

I finally finished Craig Thompson's Habibi and I'm basically left with mixed feelings. On the one hand, especially considering Thompson is a non-Muslim, the work should be viewed as an intricately crafted graphic novel which affectionately and beautifully weaves together islamicate elements into a multi-layered anachronistic narrative. The basic story deals with the life of two slaves, a boy and a girl, who meet as children and move in and out of one another's lives. This main story is then embroidered and echoed by a diverse collection of elements including Quranic and Biblical texts, meditations on Arabic calligraphy, Sufi poetry, alchemical and astrological concepts, Middle Eastern pagan myths, Chinese numerology, and even modern physics. On the other hand, the work is also full of Orientalist cliches and one-dimensional characters (misogynist men in turbans, black eunuchs, half-naked harem girls, flatulent palace officials and horny sultans). Moreover, I don't want to give away any spoilers but I really didn't find the ending very satisfying. Basically the storytelling was stylistically rich and impressive but the characters lacked depth and humanity.

Two new websites I've "discovered" recently:
Afrofutures, an online magazine dedicated to Afrofuturism and related topics, and Islam and Science Fiction: A Website on Islam, Muslims and Science Fiction. The latter site's definition of "science fiction" apparently includes graphic fiction as well which explains their interview with Crag Thompson, the author of Habibi. I'm actually in the middle of Habibi right now. I'm still not sure how I feel about it. Thompson is certainly well-intentioned and Habibi is certainly not as obviously problematic as Frank Miller's Holy Terror but it also isn't totally free of orientalist cliches either. Maybe I'll do a mini-review when I'm done.
Posted by Abdul-Halim V. at 2:36 AM 1 comment: Links to this post

fbi organizes almost all terror plots in the united states

The FBI has in recent years used trained informants not just to snitch on suspected terrorists, but to set them up from the get-go. A recent report put together by Mother Jones and the Investigative Reporting Program at the University of California-Berkley analyses some striking statistics about the role of FBI informants in terrorism cases that the Bureau has targeted in the decade since the September 11 attacks.

The report reveals that the FBI regularly infiltrates communities where they suspect terrorist-minded individuals to be engaging with others. Regardless of their intentions, agents are sent in to converse within the community, find suspects that could potentially carry out “lone wolf” attacks and then, more or less, encourage them to do so. By providing weaponry, funds and a plan, FBI-directed agents will encourage otherwise-unwilling participants to plot out terrorist attacks, only to bust them before any events fully materialize.

Additionally, one former high-level FBI officials speaking to Mother Jones says that, for every informant officially employed by the bureau, up to three unofficial agents are working undercover.

The FBI has used those informants to set-up and thus shut-down several of the more high profile would-be attacks in recent years. The report reveals that the Washington DC Metro bombing plot, the New York City subway plot, the attempt to blow up Chicago’s Sears Tower and dozens more were all orchestrated by FBI agents. In fact, reads the report, only three of the more well-known terror plots of the last decade weren’t orchestrated by FBI-involved agents.

The report reveals that in many of the stings, important meetings between informants and the unknowing participants are left purposely unrecorded, as to avoid any entrapment charges that could cause the case to be dismissed. Perhaps the most high-profile of the FBI-proposed plots was the case of the Newburgh 4. Around an hour outside of New York City, an informant infiltrated a Muslim community and engaged four local men to carry out a series of attacks. Those men may have never actually carried out an attack, but once the informant offered them a plot and a pair of missiles, they agreed. Defense attorneys cried “entrapment,” but the men still were sentenced to 25 years apiece.

"The problem with the cases we're talking about is that defendants would not have done anything if not kicked in the ass by government agents," Martin Stolar tells Mother Jones. Stolar represented the suspect involved in a New York City bombing plot that was set-up by FBI agents. "They're creating crimes to solve crimes so they can claim a victory in the war on terror."

RT: FBI organizes almost all terror plots in the US
Project Censored: FBI Agents Responsible for Majority of Terrorist Plots in the United States
Posted by Abdul-Halim V. at 6:50 PM No comments: Links to this post

put your money where your morals are

By now you've probably heard about the controversy surrounding the reality show, All-American Muslim and Lowe's decision to pull out as an advertiser in response to Islamophobic pressure from the Florida Family Association. At the moment it seems that Lowe's and Kayak.com are the only companies who admit that they've been pressured into dropping their ads from the show, but the Florida Family Association claims to have influenced a much longer list of companies:

The idea of boycotting Lowe's, Kayak.com and the rest of the companies has got me thinking more broadly about the ethical implications of our purchasing decisions. Depending on the issues which are important to you (e.g. labor practices, support for Israel or other regimes, animal cruelty, genetic modification, sustainability, other environmental impacts, sweatshops, use of pesticides, etc.) it can be a challenge to go to the store without being complicit in one kind of wrongdoing or another. (There are even some smart phone apps out there to help you navigate as you shop)

The big picture lesson seems to be that small, locally-based, independent businesses are generally better than impersonal chains.
Posted by Abdul-Halim V. at 7:29 AM No comments: Links to this post

imagine! china invades america! or "why do they hate us?"

This is amazing (except for the very last frame). If they could just find a way to genetically splice Ron Paul and the Rent is Too Damn High guy, he would be the perfect candidate.

Also see Loonwatch's: Eye-Opening Graphic: Map of Muslim Countries that the U.S. and Israel Have Bombed
Posted by Abdul-Halim V. at 1:11 PM No comments: Links to this post

many can be religious... you ain't spiritual

For more from Muslim blogger/artist, Mickey Boston / Big Brosky he shares some of his religious orientation in: Many can be Religious…you ain’t Spiritual
Posted by Abdul-Halim V. at 12:35 PM No comments: Links to this post

Mickey Boston: Ghadafi, Frantz Fanon and Marcus Garvey: Visions for Africa
Posted by Abdul-Halim V. at 10:55 AM No comments: Links to this post

Al Jazeera: Latin America's message to the Arab world by Pepe Escobar
Latin Americans should share their experiences with democratisation with other countries in the global South.
Posted by Abdul-Halim V. at 10:07 AM No comments: Links to this post

In a recent interview with the Trinidad Guardian, Imam Hydal (of the Ahmadiyya community) discusses Islamic extremism in Trinidad & Tobago. His comments are interesting but I wish he had been more responsible in his words. He frames the problem of extremism in very binary terms. On the one hand you have good "docile" Desi Indo-Trini peaceful Muslims. And on the other hand, you have extremist Saudi-trained zealot convert Afro-Trini Muslims.

The interview raises all sorts of issues in terms of racism among Muslims, ownership and authority in Islam, "traditional" interpretations versus "Salafi/Wahabi" interpretations, and other questions. It will be interesting to see if the story sparks a thoughtful response in the Trini media.
Posted by Abdul-Halim V. at 4:21 PM No comments: Links to this post

Loonwatch: Prof. Risa A. Brooks’s Study Reveals the Obvious: “Muslim Homegrown Terrorism Not a Serious Threat”
Posted by Abdul-Halim V. at 2:45 PM No comments: Links to this post 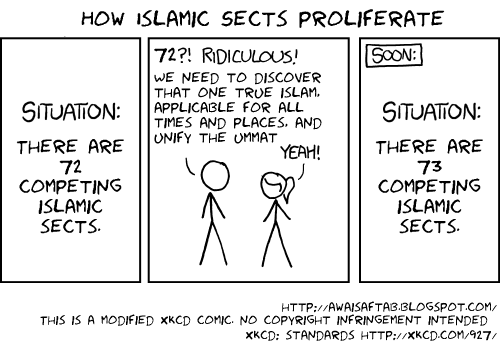 Posted by Abdul-Halim V. at 12:20 PM No comments: Links to this post

from b-boy to islamic studies scholar

I read Reza Aslan's "No God But God" a few months ago and was really impressed. After reading the above interview I'm now even more impressed with the person. The wide-ranging interview covers Aslan's time as a break dancer, his conversion to evangelical Christianity and his subsequent rediscovery to his Muslim roots, his love-hate relationship with Robert Spencer and Pamela Geller, the nature of Islamic reform, the role of rationality in Islam and Christianity, Iranian eschatology, the Arab Spring, the New Atheists, and why Osama bin Laden is like Freddie Mercury. And for an added bonus he shares his super-secret sleeper agent activation code.
Posted by Abdul-Halim V. at 1:05 PM No comments: Links to this post

are evangelicals a national security threat?

Loonwatch: Are evangelicals a national security threat?
Posted by Abdul-Halim V. at 12:56 PM No comments: Links to this post